Antalya, city on the Mediterranean 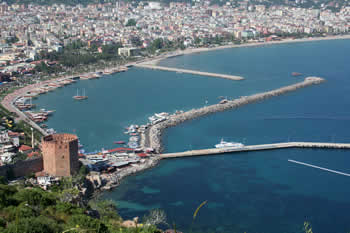 coast of south-western Turkey, is the Turkish capital of international tourism.

Situated by the Gulf of Antalya, the city of Antalya can be traced back in history as early as the 1st century BC when, as the legend has it, upon discovering this land, king Attalos II told his men that “this must be Heaven”. Today, tourists who come here from all the corners of the world say that only after seeing a sunset at Antalya can one say they have seen everything a man is allowed to see in a lifetime.

Antalya is a tourism destination characterized by a Mediterranean climate with hot, dry summers and fairly warm and rainy winters, one of the reasons why increasing numbers of tourists are turning to Antalya not only as a summer destination but also as a winter vacation resort.

Once you have tasted the Antalya cuisine, the flavour of the spicy Piyaz or of the many cold Mediterranean dishes with olive oil will get stuck on you forever, and no matter how hard you try to cook it at home there will always be a secret ingredient that you miss... the flavour of the places or the flavour of the local colour that people have learned to use in their dishes.
Apart from its cuisine, Antalya also boasts about golden beaches (Konyaalti and Lara) and foaming milky waterfalls (Düden, Manavgat) which are chief tourist attractions added to the list of reasons why people choose this vacation destination for the first time or come back here ever more.

The city of Antalya seems to have taken in all of Turkey’s cultural and historic past so well preserved and sealed by the traditional archaeology of the mosques, churches, madrasahs and hamams which stood the ruthless test of time.

The historical part of the city, Kaleiçi, is also the tourist centre of Antalya: hotels and clubs, restaurants and bars are the edifices that the modern tourist world has raised next to the Yivli Minare, a symbol of the restored historical city centre and to the Kesik Minare, a former Byzantine Pangalia church, later converted into a mosque.

Despite Antalya’s growing popularity among tourists, the main transportation here is by air, although sea and land routes have only recently been taken into consideration. However, of late, the International Antalya Airport has opened a new terminal to face the hustle and bustle of the ever increasing numbers of international tourists.

The whole urbanized Antalya transportation system makes it easy for its tourists to move from one place to another and visit all the sights they want, while still preserving their energy for the grand tour of restaurants and bars.

Thus, they can choose from tour minibuses that follow a set route, taxis, or trams so that a tour day at the Antalya Museum can be ended by a walk in the Antalya Beach Park or on the shore of the Konyaalti Beach. Likewise, they can get out of their hotel (either luxurious like Sheraton Voyager, Falez Hotel or inexpensive but comfortable) along the coast, just above the Konyaalti and Lara beaches, get on a tram, and get off at the city centre, with its streets crammed with old Turkish and Greek houses.

The legendary Turkish baths, the spicy foods, the colourful gift shops, the noisy streets and bars packed with other euphoric tourists, just like you, the historical traces preserved into Hellenistic, Roman, Byzantine or Ottoman edifices, the Antalya festivals all are reasons why you should at least once in a life time indulge yourself with this Heaven.

Start hotel is situated in the center of Antalya at 500 meters from the private beach. This Antalya accommodation features on site facilities such as: mini-bar, safe, direct dial telephone,…

With it's comfortable accommodation and excellent services Guney Brabant Hotel, Antalya, welcomes all types of holidaymakers for a pleasant and tranquil stay. Guests can relax in the…

Hotel Berke Ranch is located on one of the most beautiful coasts of Turkey, 50 km from Antalya, 6 km from Kemer and 2.5 km from the beach. This accommodation is situated between a…

Hotel Dim Suite is situated directly on the beach, at 120 km from Antalya Airport, and 5 km from Alanya city center. The rooms are equipped with air conditioning, bathtub, hair dryer,…

Aspen Hotel is located at just 200 metres from Mermerli Beach, in the district of Kaleici which is also known as the center of old Antalya City with a past of 2000 years. The things…

Remi hotel is situated in the center of Alanya, at 150 m from Celopatra beach and 120 km from Antalya Airport. The hotel has 79 rooms equipped with air conditioning, TV, balcony, shower,…

The Alp Paşa Boutique Hotel is situated in Kaleiçi, the old part of Antalya, has been totally restored and rebuilt with great care for detail. All rooms have the comfort of a modern…

Dedeman Park is situated in the center of Antalya on the sea side. The resort has 64 rooms with sea view, equipped with: telephone, mini-bar, wireless Internet connection, cable/satellite…

Club Phaselis is located in Kemer one of the famous classical sites in Turkey, with ancient ruins, sandy beaches and many recreation opportunities.

We are situated about 2 km outside of the ancient, yet beautiful port town of SiDE. (p.Seeday). The Gazipasa Hotel & Apartments are a family run establishment that are both modern…

For the comfort of the guests , 63 triple rooms, 128 double rooms and 2 disabled rooms totalling 247 rooms. We are the biggest hotel in Damlatas Street. Our rooms equiped with hair…