1000m high above the ground, edging a mountainous plateau in the Beydag National Park, the former Pisidian city of Termessos, seems to have acquired its fame and reputation owing to its being a truly stunning necropolis on the Mediterranean.

Not much is known about the history of this ancient city, but the remains of an agora, a theatre, a gymnasium and of quite a few column halls dating back from the third century A.D., are evidence of the fact that Termessos must have been a thriving hill-fort, which would give explanation as to why it was allegedly besieged, without success though, by Alexander the Great.

A 35 km-drive northwest of Antalya, and two more kilometers on foot, up the Güllük Dagi slope are sure to take you to the best preserved Turkish ruins of Termessos, wherefrom the stunning Gulf of Antalya can be seen.

Enclosed in by thick pine forests and hidden behind a carpet of plants, Termessos seems to have been deliberately hidden from sight to seal the tranquility of the area and maintain the harmony of the natural and historical treasures. Because of the alarming increase in the number of endangered animals and plants living and growing nearby the ruins of the ancient city, it has been included in the Termessos National Park which runs along the Antalya- Korkuteli highway. 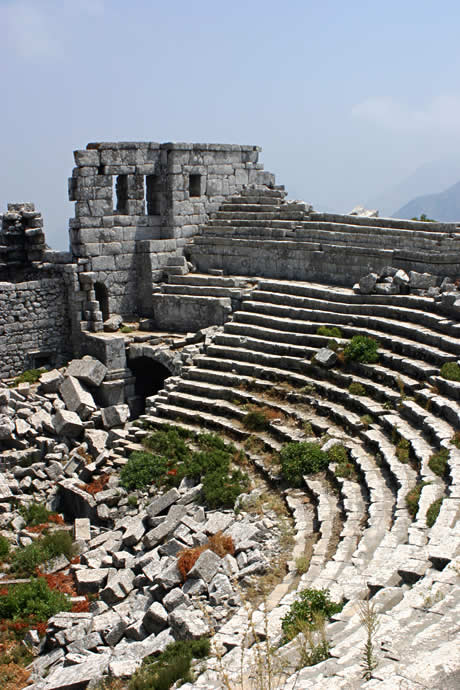 You can also visit here the tombs of Alcates, Agatemeros and the Lion decorated sarcophagi .